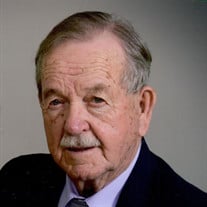 Alfred ‘Bud’ McClellan, age 94, of Weatherman Road in Spruce Pine, passed away Saturday, July 10, 2021 at Brian Center Health & Rehab in Spruce Pine. Born on March 10, 1927 in Mitchell County, he was the son of the late David McClellan, Sr. and the late Mollie King McClellan. Also preceding him in death were his brothers; Fred, Ray, Lee, and Roland McClellan and his sisters; Ethel Staton, Neveda Woody, Alma Friday, and Octavia Stamey. Bud; as his was known by family and friends, was a member of the Pine Grove United Methodist Church. He loved the Lord, his family and friends, spending time with them and visiting. He enjoyed being outdoors and gardening. Left to cherish his memories are his wife of sixty-seven years; Ittoween ‘Jimmie’ McClellan of the home; his daughter; Amy McClellan of Spruce Pine; his brother; David McClellan, Jr. and wife, Sarah of Morganton; his sister; Eva Vance of Salem, NC; several nieces and nephews. A time to support the family, share memories, and receive friends will be on Wednesday, July 14, 2021 from 1:00 pm until 2:00 pm in the Chapel of Webb Funeral Home. The funeral service will be on Wednesday, July 14 2021 at 2:00 pm in the Chapel of Webb Funeral Home with the Rev. Jock Ollis officiating. Interment will be in the Pine Grove United Methodist Church Cemetery. Words of comfort may be e-mailed to the family by going to our website; www.webbfh.com, selecting Alfred ‘Bud’ McClellan’s name and then you may sign his guestbook. Webb Funeral Home has been entrusted with the arrangements for Mr. McClellan and is honored to be serving the McClellan family. Mr. McClellan’s obituary has also been posted on Facebook for viewing.

The family of Alfred 'Bud' McClellan created this Life Tributes page to make it easy to share your memories.