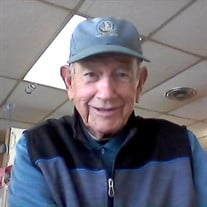 Carl Baker, age 96, of Amethyst Street in Spruce Pine, passed away, Sunday, January 16, 2022 at Blue Ridge Regional Hospital in Spruce Pine. Born on July 17, 1925 in Clay County, KY, he was the son of the late John and Lillie Hornsby Baker. In addition to his parents, he was preceded in death by his wife, Ruth Autrey Baker who passed away in 2007. Also preceding him death were his brothers; Oral, Floyd, Ernest, and Paul Baker; his sisters; Oma Riddle, Shaby Humphries, Georgia Howell, and Sarah Rigby; and his son-in-law; David Pitman. Carl was member of the First Presbyterian Church of Spruce Pine. He was a U.S. Marine Veteran of World War II. He fought in the Battle of Iwo Jima, Battle of Guadalcanal, and Battle of Saipan. At the time of his death, he was the oldest World War Veteran in Mitchell County. He was a member of Vesper Lodge #554 A.F. & A.M. and was scheduled to receive a seventy-five year membership pin later this year. He was the owner of Carl’s Ladies and Men’s Shop in Spruce Pine and also the owner of Comac’s Dime Store. His passion was playing golf. Through the years, he helped many young golfers learn to play the game of golf to their best. Recently, a plaque was dedicated in his honor at the Grassy Creek Golf Course in Spruce Pine on the ninth hole and that area was named, ‘Baker’s Alley’. Left to cherish his memory is his daughter; Beverly Pitman of North Myrtle Beach, SC; his granddaughter; Hailey Agler and husband, Bill of Sacramento, CA; his great grandchildren; Tyler and Brianna; and several nieces and nephews. A time to support the family, share memories, and receive friends will be Thursday, January 20, 2022 from 1:00 pm until 2:00 pm in the Chapel of Webb Funeral Home. The funeral service will be on Thursday, January 20, 2022 at 2:00 pm with Dr. Rocky Branch and Rev. Michael Poulos officiating. Masonic Graveside Rites will be conducted by Vesper Masonic Lodge #554 A.F. & A.M. Interment will be in the Spruce Pine Memorial Cemetery. Words of comfort may be e-mailed to the family by going to our website; www.webbfh.com, selecting Carl Baker’s name and then you may sign his guestbook. Webb Funeral Home has been entrusted with the arrangements for Mr. Baker and is honored to be serving the Baker family. Mr. Baker’s obituary has also been posted on Facebook for viewing.

The family of Carl Baker created this Life Tributes page to make it easy to share your memories.