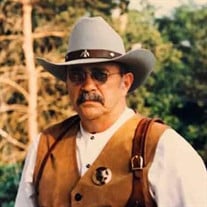 Dennis E. White, a lifelong resident of Second Creek, West Virginia peacefully passed away on September 23, 2019, at the age of 77. He was the son of the late Marcus and Alice White, also of Second Creek. A 1960 graduate of Union High School, Dennis was survived by his wife Linda of 57 years, daughters Angelia McCutcheon of Etowah, NC, Tina White of Spruce Pine, NC, Pamela White Wolsey and her husband Josh of Charlotte, NC; grandsons Nate McCutcheon and his companion Faith Cox of Blacksburg, Va.; Dylan Shires and his wife Jackie, and their children, Grayson and Spencer of Kincaid, WV, and one cousin, Dorothy Pumphrey of Martinsburg, WV. Although Dennis was an only child, lifelong friends David Osborne and Jim VanMetre were his brothers. Dennis worked for the Department of Highways for 32 years and found his joy in his many hobbies that continued long after retirement. He made music, muzzleloaders, leatherwork, bows, knives, bread, and beer. He was a spelunker, historian, gardener, photographer, storyteller, and artist. He raised angelfish, and he played music with the Appalachian Irish bands The Clan Erdverkle and Poteen, and he belonged to Friends of THE Second Creek, and SASS (Single Action Shooting Society). If you asked him, he would have told you that his most enjoyable times were spent hunting in Texas, watching bull riding, attending gun shows, and nibbling on circus peanuts. In lieu of flowers, the family requests donations to Friends of THE Second Creek, Inc. c/o Dixie Hoke-Webb, 1331 Second Creek Rd., Second Creek, WV 24974. A memorial service will be planned and announced later to take place in West Virginia. Words of comfort may be e-mailed to the family by going to our website; www.webbfh.com., selecting Dennis White’s name and then you may sign his guestbook. Webb Funeral Home of Spruce Pine is honored to be assisting the White family. Mr. White’s obituary has also been posted on Facebook for viewing.

Dennis E. White, a lifelong resident of Second Creek, West Virginia peacefully passed away on September 23, 2019, at the age of 77. He was the son of the late Marcus and Alice White, also of Second Creek. A 1960 graduate of Union High School,... View Obituary & Service Information

The family of Dennis E. White created this Life Tributes page to make it easy to share your memories.

Send flowers to the White family.