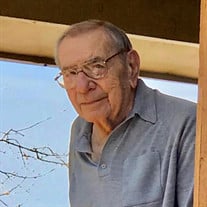 Ed Kozakiewicz, age 92, of Swiss Pine Lake Drive in Spruce Pine, died Thursday, November 21, 2019 at the Mitchell House in Spruce Pine. Born on September 12, 1927 in Kulpmont, PA, he was the son of the late Edward M. Kozakiewicz, Sr. and Mary Kozakiewicz. In addition to his parents, he was also preceded in death by two brothers; Bernarr Kozakiewicz and Robert Kozak and a grandson; Jacob Basemann. Ed was a member of the St. Lucien Catholic Church in Spruce Pine and was a U.S. Army veteran of the Korean War. He was known as a family man that loved all of his family and was a great husband and father. He was always punctual. He was President of the Detroit Robert Burns Society and a supporter of Special Olympics. In his spare time he enjoyed woodworking. Left to cherish his memories are his wife of forty-nine and half years; Margaret I. Kozakiewicz of the home; his daughters; Patricia Martel and husband, Mark of Ave Maria, FL; Pamela Bellino and husband, Frank of Canton, MI; Helena Kozakiewicz of San Diego,CA; and his son; Michael Kozakiewicz of Huntersville, NC; his grandchildren; Andrew Martel, Matthew Martel, Mary Bellino, Frank Bellino, III, and Kevin Basemann; several nieces and several nephews. A Mass of Christian Burial will be held Monday, December 2, 2019 at 9:00am at St. Lucien Catholic Church in Spruce Pine with Father Gober officiating. Interment will be held following the service at Spruce Pine Memorial Cemetery with full military rites. The family requests that memorial donations be made to; Hospice and Palliative Care of the Blue Ridge, 236 Hospital Drive, Spruce Pine, NC 28777. Words of comfort may be e-mailed to the family by going to our website; www.webbfh.com., selecting Ed Kozakiewicz name and then you may sign his guestbook. Webb Funeral Home of Spruce Pine is honored to be assisting the Kozakiewicz family. Mr. Kozakiewicz obituary has also been posted on Facebook for viewing.

The family of Ed Kozakiewicz created this Life Tributes page to make it easy to share your memories.

Send flowers to the Kozakiewicz family.