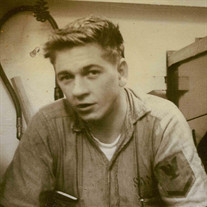 Elbert Stamey, age 72, of N.C. Hwy. 183 South in Newland, the Linville Falls community, died Saturday, July 13, 2019 at his home. Born on January 19, 1947 in Avery County, he was the son of the late Elbert Emanuel Stamey, Jr. and the late Maxine Stout Stamey. In addition to his parents, he was also preceded in death by his wife, Judy Pyatte Stamey who passed away in 2015 and also by a brother, Frank Stamey. Elbert was retired from the public works department for the town of Spruce Pine where he served as the director for many years. He enjoyed riding his motorcycle with his wife, geneaology, his grandchildren and his family. Left to cherish his memories are his daughters; Darla Jean Stamey and Miranda Webb of Spruce Pine; Elberta Lynn Cook and husband, Richard of Danville, VA; and Miriam Lee Stamey of Linville Falls; his sisters; Gretta Stout of Morganton and Evena Stamey of Ellenton, FL; his brother; Nelson Stamey and wife, Ginny of Coos Bay, OR; and his grandchildren; Serina, Mara, Dylen, Marissa, Carolina and Lilly. He also leaves behind a aunt; Leona Smith of Hudson. The family respectfully requests the honor of your presence at the funeral service for Elbert Stamey on Tuesday, July 16, 2019 at 7:00pm in the Chapel of Webb Funeral Home with the Rev. Ronnie Pyatte officiating. A time to support the family, share memories and receive friends will be on Tuesday, July 16 from 6:00pm until the service hour in the funeral home chapel. Interment will be Wednesday, July 17 at 10:00am in the Stameytown Cemetery with military honors. Words of comfort may be e-mailed to the family by going to our website; www.webbfh.com., selecting Elbert Stamey’s name and then you may sign his guestbook. Webb Funeral Home of Spruce Pine is honored to be assisting the Stamey family.

Elbert Stamey, age 72, of N.C. Hwy. 183 South in Newland, the Linville Falls community, died Saturday, July 13, 2019 at his home. Born on January 19, 1947 in Avery County, he was the son of the late Elbert Emanuel Stamey, Jr. and the late Maxine... View Obituary & Service Information

The family of Elbert Stamey created this Life Tributes page to make it easy to share your memories.

Send flowers to the Stamey family.