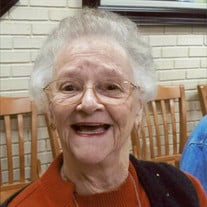 Evelyn Garland Hall born July 26th 1930, went to be with her Lord and Savior on September 6th 2019. She was the wife of the late Bill Wilson, the late John L. Biggerstaff and the late William Hall. She loved the Lord, her family and friends, and the people of this community. She worked as a young child in the Altapass Orchards picking and packing apples and was inspired to become a nurse by Lydia Hoilman, an early Spanish American war nurse who brought community health to our area in the early 1900’s. She received her diploma in nursing in 1954 from the Grace Hospital School of Nursing and continued a lifelong friendship with her dear colleagues. She began work at the Williams Clinic in Spruce Pine until the opening of the doors of Spruce Pine Community Hospital where she continued nursing care for so many throughout the years. She was a CPR instructor and an honorary member of the South Toe Emergency Medical Services. She was also a volunteer for the Altapass Fire Department. In 1976, she completed the first certificate level Family Nurse Practitioner Program conducted by MAHEC. In 1989, she went to work for the Mitchell County Health Department and continued in the role of practitioner there until her retirement in 1997. She was honored as a Mary Lewis Wyche Fellow at the 100 year celebration of nursing in Raleigh. North Carolina was the first state in the nation to pass professional licensure for nursing. In her off time, she was a Girl Scout leader for many years and loved traveling, camping, fishing, gardening and canning. Evelyn was a member of Mitchell County Gideons Auxiliary and a member of Grace Community Church in Marion NC where she was loved by so many. She is survived by three daughters and sons-in-law; Cathe and Ray Burleson of Asheville, NC; Sharon and Jake Brewer of Youngsville, NC; and Vickie and Tim Quinn of Spruce Pine, NC; two granddaughters; Lauren and Elizabeth Brewer of Apex, NC; matriarch daughter; Hettie Lou Garland of Asheville, NC; a sister and brother; Iris Burleson of Spruce Pine and Herbert Garland of Fairfax, VA; four nephews and three nieces; Gary Garland, Bruce Garland, Wayne Garland, Carl Garland, Joyce Garland, Debbie Mills, and Jackie Burleson. She was preceded in death by her only son; John Wesley Biggerstaff. A Celebration of Life service will be held Saturday September 28th with visitation at 2:00 pm with refreshments in the church fellowship hall and the service will follow at 3:00pm in the First Baptist Church of Spruce Pine, NC. In lieu of flowers donations may be made to the wonderful Hospice and Palliative Care of the Blue Ridge, 236 Hospital Drive, Spruce Pine, NC 28777. Words of comfort may be e-mailed to the family by going to our website; www.webbfh.com., selecting Evelyn Hall’s name and then you may sign her guestbook. Webb Funeral Home is honored to be assisting the Hall family. Mrs. Hall’s obituary has also been posted on Facebook for viewing. ~ ~ ~ ~ ~ ~ ~ ~ ~ ~ ~ ~ ~ ~ ~ ~ ~ ~ ~ ~ ~ ~ ~ ~ ~ ~ ~ ~ ~ ~ ~ ~ ~ ~ ~ ~ ~ ~ ~ ~ ~ ~ ~ ~ ~ PLEASE MAKE DONATIONS TO: Hospice and Palliative Care of the Blue Ridge 236 Hospital Drive Spruce Pine, NC 28777 www.hospiceblueridge.com ~ ~ ~ ~ ~ ~ ~ ~ ~ ~ ~ ~ ~ ~ ~ ~ ~ ~ ~ ~ ~ ~ ~ ~ ~ ~ ~ ~ ~ ~ ~ ~ ~ ~ ~ ~ ~ ~ ~ ~ ~ ~ ~ ~ ~

Evelyn Garland Hall born July 26th 1930, went to be with her Lord and Savior on September 6th 2019. She was the wife of the late Bill Wilson, the late John L. Biggerstaff and the late William Hall. She loved the Lord, her family and friends,... View Obituary & Service Information

The family of Evelyn Hall created this Life Tributes page to make it easy to share your memories.

Send flowers to the Hall family.