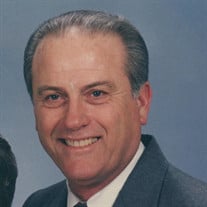 Frank Edgar Roe, age 85, of Little Switzerland, passed away on Tuesday, November 24, 2020 at Brian Center Health & Rehab in Spruce Pine. Born on June 3, 1935 in Bay City, TX, he was the son of the late Jack Edgar Roe and Macil Mae Glasscock Roe. While his early years were spent in Texas, his family returned to Louisiana where Frank attended school and worked for most of his professional life. He participated in many athletic activities and earned a football scholarship to attend McNeese University. Frank married his high school sweetheart Lysbeth "Anne" Parsons on Christmas Eve, 1954 and they were happily married until her death in 2014. Together they had three children; Cheryl Renee Drennan; who is deceased, Bryan Roe and wife, Carmen and David Roe and wife, Julene Roe. Frank's career opportunities took him to Gretna, LA where he worked for the Louisiana State Dept. of Highways. Later he took a job with Halliburton servicing the offshore oil rigs in the Gulf of Mexico. After a few years, he changed jobs and took his family to New Orleans where he worked for the Amstar Corporation. In his mid-forties he changed jobs for the last time and worked for the Amoco Production Company. Frank and his family survived a plant explosion, a near fatal car crash, two hurricanes and two floods. But Frank clung to his Lord and Savior to sustain him during these turbulent times. After his retirement, Frank and his wife Anne moved to the mountains of Western North Carolina where they remained until both their deaths. For a time they came out of retirement to care for therapeutic foster boys in their home. Left to cherish his memories are his sons Bryan Roe and wife, Carmen and David Roe and wife, Julene, his grandchildren; Jamie, Leslye Phillips, and Tracy Drennan; Cristina McCurry and James Roe; Jordan, Preston and Ethan Roe. Additionally, Frank was blessed with his great-grandchildren Jace Drennan, Alexis Weyenberg, Lilliana Gault, Cyrus and Jemma Roe and Ryder McCurry. A memorial service will be planned for a later date to be held in Louisiana. Words of comfort may be e-mailed to the family by going to our website; www.webbfh.com., selecting Frank Roe’s name and then you may sign his guestbook. Webb Funeral Home has been entrusted with the arrangements for Mr. Roe and is honored to be serving the Roe family. Mr. Roe’s obituary has also been posted on Facebook for viewing.

The family of Frank Roe created this Life Tributes page to make it easy to share your memories.

Frank Edgar Roe, age 85, of Little Switzerland, passed away on...

Send flowers to the Roe family.