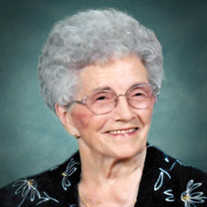 Georgia Ann Woody Burleson Johnson went to her Heavenly home on April 18th, 2020. She was born on August 27th, 1925, in Avery County and was the daughter of Reverend Albert and Bessie Woody. She grew up in the mountains of North Carolina and West Virginia during the depression. In addition to her parents, she was preceded in death by her first husband, Jason Burleson; her second husband, Walter Johnson; a son Charles Burleson; and two sisters, Lillian Harding and Marjorie Franklin. She is survived by one son, Kenneth (Ken); a special niece, Jeanne Harding; and four grandchildren; Shannon Burleson of Greensboro; Grey Burleson of Aiken, SC; Ryan Burleson of High Point; and Elliott Burleson (Amy) of Durham. At a time when very few women were represented in business management, Georgia became a leader in the area of textile manufacturing, which was economically important to the mountains of North Carolina from the 1950s to the 1980s. She began work just out of high school for Armoured Garments, a jeans manufacturer. Through hard work and determination, she rose to position of plant supervisor. She later became manager of several other plants during her career. She was loved and respected by her many employees and was well known in the Tri County area for her leadership in the economic development of the area. Her accomplishments were recognized in a book, Voices of the Valley by Elizabeth Hunter. After retirement, she worked in real estate for her son, Charlie, at Beech Mountain Realty for several years. For all her accomplishments, what meant the most to her was family, friends, church, and faith. She was a member of First Baptist Church in Spruce Pine for more than 60 years, where she served in several capacities. She had a wonderful sense of humor that was very entertaining. She loved children and worked with foster children for a time. Travel was an enjoyable hobby, and she was always ready to go on a trip at a moment’s notice. She enjoyed hosting the annual Burleson Family Reunion for many years. She was a caring person who made a difference in the lives of others. In lieu of a funeral service during this time, a private graveside burial will be held on Tuesday, April 21, 2020 at the Burleson Cemetery in Newland, with the Dr. Rocky Branch officiating. A memorial service to celebrate the life of Georgia Woody Burleson Johnson will be announced at a later date. Memorials may do be directed to First Baptist Church of Spruce Pine or Hospice and Palliative Care of the Blue Ridge. The family wishes to thank the staff of Brookside/Smokey Ridge Nursing Home for their tender and loving care for Georgia for the past four and a half years. Words of comfort may be e-mailed to the family by going to our website; www.webbfh.com., selecting Georgia Burleson’s name and then you may sign her guestbook. Webb Funeral Home of Spruce Pine is honored to be assisting the Burleson family.

Georgia Ann Woody Burleson Johnson went to her Heavenly home on April 18th, 2020. She was born on August 27th, 1925, in Avery County and was the daughter of Reverend Albert and Bessie Woody. She grew up in the mountains of North Carolina and... View Obituary & Service Information

The family of Georgia Burleson created this Life Tributes page to make it easy to share your memories.

Send flowers to the Burleson family.