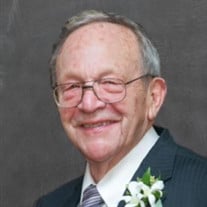 Herman Jennings Baker, Jr., age 86, of Little Switzerland, North Carolina, passed away on October 25, 2020, surrounded in love by his children. He is reunited with his beloved wife, Dawn, parents, Herman and Violet, and lifelong friend and brother-in-law, Joe Long. Herman was born on November 14, 1933 in Wise, Virginia, the second of six children to the late Herman Jennings Baker, Sr. and Violet Lipps Baker. He was raised in Bristol, Virginia and graduated from Virginia High School in 1952. He attended Washington and Lee University before serving in the U.S. Army. After completing his military service, he played football for Clemson University and graduated with a BS in Chemical Engineering. While at Clemson, he met and married his wife of 54 years, Dawn Jacobs Baker of Johnson City, Tennessee. Herman had a fulfilling engineering career which took he and Dawn, and their children, Mary, Eric, and Carl, to homes in several states and abroad to Iran, cultivating many cherished friendships along the way. The final stop was in Baton Rouge, Louisiana where he spent the longest stint of his career. When he retired from Arcadian Corporation in 1992 as the Western Region District Manager, he was responsible for four ammonia plant complexes in several states. After retirement, he used his skills and gifts to pursue a personal dream. He designed and built a beautiful home in the Blue Ridge Mountains so he could live closer to his parents and extended family. He chose Little Switzerland because of its beauty and the Swiss heritage of his mother. Herman and Dawn shared the gift of hospitality and enjoyed hosting family and friends in their home. He continued this after her passing and looked forward to having visitors. Throughout his life he was always busy either building or repairing something and enjoyed listening to classical music while he worked. He was an avid fan of all sports with an intense passion for football. A few of his favorite teams included Clemson, Virginia Tech, and LSU, and he amused his Louisiana friends when he told them that he played football for the “real” Tigers. Despite the many accomplishments he made, his greatest joy was spending time with his family. Known as “Granddaddy” or “Uncle Herman” to the younger generations, he held large Thanksgiving celebrations in his mountain home and looked forward to the family beach trip each summer which was a tradition started by his parents. He loved history and had a great interest in genealogy studies. He had a tender spot for animals and will be greatly missed by his dog, Ruby, who spent his last years with him. Herman is survived by his daughter Mary Baker Vaught and husband David of Charlotte, NC; son Henry Eric Baker of Prairieville, LA; son Carl Elex Baker and wife Robin of Baton Rouge, LA; four grandchildren, Allison Vaught Lawing and husband Nathan of Maiden, NC; Matthew Richmond Baker of Layton, UT; Charlotte Baker Moss and husband Matt of Jackson, MS; David Jennings Baker of Baton Rouge, LA; a great-grandson and his mother, Luke Jacobs Baker and Ahlisha Baker of Glenwood, AR; siblings, Jane Baker Long of Newton, NC; Fred Baker and wife Peggy of Knoxville, TN; Nancy Baker Long and husband Phil of Simpsonville, SC; Doris Baker Gallagher and husband Fred of Lynchburg, VA; and Carter Baker and wife Beverly of Bristol, VA. His many nieces and nephews will mourn the loss of their Uncle Herman who never grew tired of telling them family stories. A funeral service will be held in the chapel at the Webb Funeral Home in Spruce Pine, North Carolina at noon on Thursday, November 5, 2020. The family will be receiving visitors at 11:00 a.m., before the service. Burial will take place at the Spruce Pine Memorial Cemetery following the service. Pallbearers will be Matthew Baker, David Baker, Fred Baker, Jr., Rodney Gallagher, Nathan Lawing, Jett Phillips, Brian Richmond, and Robert Thress. Honorary pallbearers will be Paul Badame, James D. “Moe” Richmond, Jr., and Robert “Bob” Stewart. In lieu of flowers, donations can be made in his honor to the National Multiple Sclerosis Society, P.O. Box 4125, Houston, Texas, 77210-4125, or https://www.nationalmssociety.org/Donate. Due to the current COVID-19 regulations, our staff is committed to taking care of our guests and families that we serve. Please understand we will be following the State’s COVID guidelines. We also ask all guests and family members attending the graveside service to please bring and wear a mask. Words of comfort may be e-mailed to the family by going to our website; www.webbfh.com., selecting Herman Baker, Jr’s. name and then you may sign his guestbook. Webb Funeral Home has been entrusted with the arrangements for Mr. Baker and is honored to be serving the Baker family. Mr. Baker’s obituary has also been posted on Facebook for viewing.

Herman Jennings Baker, Jr., age 86, of Little Switzerland, North Carolina, passed away on October 25, 2020, surrounded in love by his children. He is reunited with his beloved wife, Dawn, parents, Herman and Violet, and lifelong friend and brother-in-law,... View Obituary & Service Information

The family of Herman J. Baker Jr. created this Life Tributes page to make it easy to share your memories.