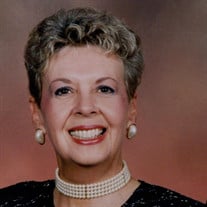 Hettie Lou was born April 28, 1943 to Fred Leonard and Beulah Hughes Garland in Bakersville, NC at the home place of her mother and maternal grandparents, Mamie Phillips Hughes and Warfield Hughes. She had many childhood memories of her paternal... View Obituary & Service Information

The family of Hettie Garland created this Life Tributes page to make it easy to share your memories.

Send flowers to the Garland family.