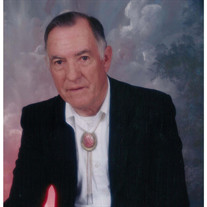 Jack McKinney, age 81, formerly of Spruce Pine, died Wednesday, June 19, 2019 at the Memorial Campus of Mission Hospitals in Asheville. Born on September 29, 1937 in Mitchell County, he was the son of the late Nettie Bailey McKinney. In addition to his mother, he was preceded in death by his wives, Arzella McKinney and Ada Love McKinney. He was also preceded in death by an infant brother; Billy Wayne McKinney; a sister; Gertrude Johnson; a brother; Paul McKinney; six sons; and a grandson; Kyle Allen. Jack enjoyed playing the fiddle, he also enjoyed bluegrass and country music. He loved his children and grandchildren and spending time with all of his family. Left to cherish his memories are his son; Danny McKinney and wife, Deanna of Marion; his daughter; Sarah Allen and husband, Gary of Spruce Pine; his stepson; Chuck Helms of Lexington, KY; his stepdaughter; Pam Loftis of Marion; his brother; Terry McKinney and wife, Ruth of Spruce Pine; his sisters; Sadie Andrews of Marion and Theresa Newton of Marion; his half-brother; Ralph Biddix of Illinois; his half-sister; Jo Ann Riddle of Morganton; his grandchildren; Derek McKinney and wife, Tiffany of Marion, Dylan McKinney and wife, Jennifer of Nebo, Brandy McKinney of Marion, Kassandra Allen of Spruce Pine and Travis Allen of Spruce Pine; his step grandchildren; Sam Phillips of Marion, Derek Helms and Justin Helms both of Kentucky; fifteen great grandchildren; three great great grandchildren; numerous nieces and nephews. A time to support the family, share memories and receive friends will be on Saturday, June 22, 2019 from 4:00 pm until 5:00 pm in the Chapel of Webb Funeral Home. The family respectfully requests the honor of your presence at the funeral service for Jack McKinney on Saturday, June 22, 2019 at 5:00 pm in the Chapel of Webb Funeral Home with the Rev. Sam Phillips officiating. Interment will follow in the McKinney Gap Cemetery. Words of comfort may be e-mailed to the family by going to our website; www.webbfh.com., selecting Jack McKinney’s name and then you may sign his guestbook. Webb Funeral Home of Spruce Pine is honored to be assisting the McKinney family. Mr. McKinney’s obituary has also been posted on Facebook for viewing.

Jack McKinney, age 81, formerly of Spruce Pine, died Wednesday, June 19, 2019 at the Memorial Campus of Mission Hospitals in Asheville. Born on September 29, 1937 in Mitchell County, he was the son of the late Nettie Bailey McKinney. In addition... View Obituary & Service Information

The family of Jack McKinney created this Life Tributes page to make it easy to share your memories.

Send flowers to the McKinney family.