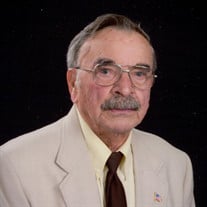 ‘Pepsi’ Jack Young, named George Homer Young, Jr. by his mother and nicknamed, Jack by his father was born December 9, 1926 in Mitchell County. He was preceded in death by his parents; George H. and Cordie Love Young, brothers; Finley Love and wife, Edith, Ray Young and wife, Dora Lou, Edward Young, and sister; Melba Miller and husband, Howard. In the winter of 1944 before his 18th birthday during WWII, Jack left home in Spruce Pine with his best friend, Charles Silvers to serve in the Merchant Marines. His training was at Sheepshead Bay, NY. All of the young men swam in icy water as part of their survival training. Jack developed pneumonia and was in the hospital when his group deployed on a Liberty ship taking supplies to the troops overseas. The ship was torpedoed a few weeks later, all lives were lost. Pneumonia saved Jack's life. On February 8, 2020 after a long and God blessed life, pneumonia came again. After his time in the Merchant Marines, Jack returned home and married Mary Sue Roach in June of 1947. In 1949 they moved to Detroit, MI for work in the auto industry. A son, Gary Michael was born August 1950. Enough of life in the north, the young family moved back to Spruce Pine where Jack took a job with the police department. He became Chief of Police in Spruce Pine and served the town until 1954 when he took a job offer with Pepsi Cola. A daughter, Deborah was born in April of 1954. Jack became manager of Pepsi Cola bottling plant in Spruce Pine covering Mitchell, Avery, Yancey, and Watauga counties for the Hickory, NC franchise. He was with Pepsi for thirty-four years before retiring. As a child Jack played on the pile of stones that were used to build the First Baptist Church. He attended and was a long standing member of the First Baptist Church of Spruce Pine where he served as a deacon, and Sunday School teacher. He attended regularly as long as he was physically able and when he could not he listened faithfully on the radio. Jack is survived by his wife of seventy-two years; Mary Sue, his son; Gary, his daughter, Deborah Tolley and husband, Keith, his grandchildren; Melissa Woody and husband, Dailen, Daniel Mark, Scott Anthony Tolley and wife, Jessi, John Michael Tolley and wife, Brittany, and great-grandchildren, Caden James Young, Sophia Grace Woody, Maddox Isaiah Woody, Addie Jade Young, Dawsyn Belle Tolley, Dallas Jackson Tolley and Jace Anthony Tolley, also numerous nephews, and nieces. The family respectfully requests the honor of your presence at the funeral service for Jack Young on Tuesday, February 11, 2020 at 3:00 pm at the First Baptist Church of Spruce Pine with Dr. Rocky Branch officiating. A time to support the family, share memories and receive friends will be Tuesday, February 11, 2020 from 1:30 pm until 3:00 pm at the First Baptist Church of Spruce Pine. Interment will be in the Spruce Pine Memorial Cemetery. Words of comfort may be e-mailed to the family by going to our website; www.webbfh.com., selecting Jack Young’s name and then you may sign his guestbook. Webb Funeral Home is honored to be serving the Young family. Mr. Young’s obituary has also been posted on Facebook for viewing.

&#8216;Pepsi&#8217; Jack Young, named George Homer Young, Jr. by his mother and nicknamed, Jack by his father was born December 9, 1926 in Mitchell County. He was preceded in death by his parents; George H. and Cordie Love Young, brothers; Finley... View Obituary & Service Information

The family of Jack Young created this Life Tributes page to make it easy to share your memories.

Send flowers to the Young family.