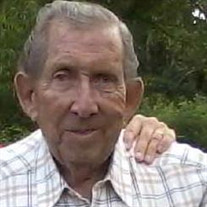 James Hugh Stewart, age 90, of South Toe River, Burnsville, died Thursday, November 1, 2018 at his home. Born on June 23, 1928 in Mitchell County, he was the son of the late Charlie and Lilly McKinney Stewart. In addition to his parents, he was preceded in death by his first wife, Hazel Stewart, two brothers George and Joseph Stewart, and four sisters, Florence Stewart, Gertrude Saylor, Ethel Monteith and Stella Palmer. James was a member of the Bakersville Baptist Church, a World War II Navy Veteran, having served on the USS Missouri Battleship, and a retired body shop repairman and mobile home mover. He liked to work, read and watch Gunsmoke. He was truly a character out of a novel and his presence was bigger than life. Left to cherish his memories are his wife of forty-three years, Gloria Stewart; two daughters, Cynthia Stewart of Linville Falls and Diane Meatyard (Christopher) of Lexington, Kentucky; two sons, Billy Stewart (Kymra) of Oak Island, and James Stewart (Aubrey) of Asheville; two step-sons, David Hoilman (Naomi) and Mark Hoilman, all of Burnsville. Eleven grandchildren, eight great-grandchildren and several nieces and nephews also survive. The family respectfully requests the honor of your presence at the funeral service honoring the life of James Hugh Stewart on Sunday, November 4, 2018, at 3:00 pm at Webb Funeral Home Chapel with Billy Stewart officiating. A time to support the family, share memories and receive friends will be on Sunday, November 4, 2018 from 2:00 pm until the service hour. Graveside services and internment will follow the service at the Bandana Cemetery at Silver Chapel Baptist Church in Mitchell County. The family would like to extend special “thanks” to Dr. Brian Smith and Dr. Jennifer Larson for their care and concern for Mr. Stewart. Words of comfort may be e-mailed to the family by going to our website; www.webbfh.com., selecting James Stewart’s name and then you may sign his guestbook. Webb Funeral Home of Spruce Pine is honored to be assisting the Stewart family.

James Hugh Stewart, age 90, of South Toe River, Burnsville, died Thursday, November 1, 2018 at his home. Born on June 23, 1928 in Mitchell County, he was the son of the late Charlie and Lilly McKinney Stewart. In addition to his parents, he... View Obituary & Service Information

The family of James Stewart created this Life Tributes page to make it easy to share your memories.

Send flowers to the Stewart family.