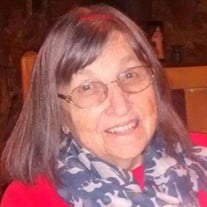 Jennie Ruth Grindstaff-Taylor (nee Bates) was born in Aiken, South Carolina on February 5, 1934. She was the only child of George Frampton and Emma Belle (nee Weeks) Bates. She passed away on March 29, 2021 at the age of 87 at the home of her daughter, Diane, where she resided after the death of her husband L.H. Taylor. Jennie met the father of her children, Charlie Grindstaff, while working at Chimney Rock, NC in the summer of 1952. They were married for more than 25 years. Their journey took them through many states ultimately settling in Clendenin, WV where they raised their family. Later, Jennie met and married L.H. Taylor and together they enjoyed many years with their blended families enjoying their 10 children and many grandchildren in their cozy home on the Elk River in Procious, WV. They move to Weston, WV in their retirement to be near Stonewall Jackson Lake where they spent several happy years together enjoying fishing, sight-seeing and spending time in nature, often accompanied by their children, grandchildren and eventually great-grandchildren. Jennie worked for the State of WV retiring in 1990. She was preceded in death by husband, L.H. Taylor, son-in-law Bob Broadwater, and the father of her children, Charlie Grindstaff. Those left to cherish her memory are her children, Jim Poston of Panama City, FL, Tony Grindstaff (Debbie) of Charleston, WV, Dean Grindstaff (Jannie) of Pinch WV, Lynn Sizemore (David) of Bomont, WV, Glenn Grindstaff (Candi) of Morgantown, WV, Doug Grindstaff of Elkview, WV and Diane Broadwater of Sprue Pine, NC; along with her step-children; Fran Naylor (Bill), Barbara Dye and Barry Taylor (Pat) of Clendenin, WV; her beloved 17 grandchildren, 29 great-grandchildren and 3 great-great grandchildren as well as many step-grandchildren and step-great grandchildren. At Jennie’s request there will not be funeral service. She has chosen to be cremated and those services are being provided by Webb Funeral Home in Spruce Pine, NC. A celebration of her life will be held at a later date. The family would like to thank Alicia and the rest of the staff at Hospice of Mitchell County for the care provided to Jennie in her final days. Words of comfort may be e-mailed to the family by going to our website; www.webbfh.com, selecting Jennie Taylor’s name and then you may sign her guestbook. Webb Funeral Home has been entrusted with the arrangements for Mrs. Taylor and is honored to be serving the Taylor family. Mrs. Taylor’s obituary has also been posted on Facebook for viewing.

Jennie Ruth Grindstaff-Taylor (nee Bates) was born in Aiken, South Carolina on February 5, 1934. She was the only child of George Frampton and Emma Belle (nee Weeks) Bates. She passed away on March 29, 2021 at the age of 87 at the home of... View Obituary & Service Information

The family of Jennie G. Taylor created this Life Tributes page to make it easy to share your memories.

Send flowers to the Taylor family.