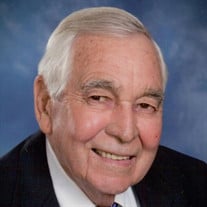 Jim Gouge, age 83, a resident of Spruce Pine, died Wednesday, March 18, 2020 at Blue Ridge Regional Hospital in Spruce Pine after a two year battle with various health issues. He was born in Spruce Pine, North Carolina to James Jeffery Gouge, Sr and Georgia Nichols Gouge both of whom preceded him in death. James Gouge, Sr. worked for Standard Oil Company which required frequent relocation of his family. One of Jim's favorite stories was that he attended eleven different school systems in his twelve years of schooling. Jim served his country in the Korean War before he returned to Spruce Pine to join his father's family business, J J Gouge & Son Oil Company. He was married to Margaret Ann Banks for forty-three years. She preceded him in death as a result of cancer. Jim was very active in his business, community and church. He served on many boards and advisory councils some of which were; Exxon's National Distributor Advisory Council, Tiger-Mac Advisory Council, First Union Bank, Mitchell County YMCA, Western North Carolina Development, and Spruce Pine First Baptist Deacon's Board. One of his greatest joys was the many years he spent coaching youth sports in Mitchell County. While directing Gouge Oil Company, Jim earned Exxon's most prestigious Commitment to Excellence Award several times as well as Exxon's Circle of Excellence. He made many lifelong friends in the petroleum industry all across the nation. He was also a member of the North Carolina Convenience and Marketers Association. Jim was a member of First Baptist Church where he served as deacon and chairman of the board of deacons, as well as serving on many different committees for the church. He was a dedicated layman and always available to lend his help anyway it was needed. Jim was a lifelong member of the Spruce Pine Kiwanis Club and enjoyed delivering food baskets at Christmas each year. Jim had a passion for trout fishing. His favorite week of the year always came on his birthday where he spent the week with his friends fishing for Speckled Trout on the Big Snowbird Creek. Jim is survived by his wife; Dorothy Phillips Gouge; his sister; Barbara Buchanan of Spruce Pine, his brother; Steve Gouge and wife, Wanda of Taylorsville, Kentucky; his son; Jeff Gouge and wife, Kim of Spruce Pine, his daughter; Lynne Hopper and husband, David of Woodstock, Georgia; his grandchildren; Megan and husband, Ridge Phillips of Newland, Scott Gouge of Spruce Pine, Lindsey and husband, Cameron Miller and great granddaughter, Maggie Anne of Atlanta, and Haley Montgomery of Orlando, Florida as well as several nieces and nephews. A family graveside service will be held at 3:00 pm in the Spruce Pine Memorial Cemetery on Friday March 20, 2020 with Dr. Rocky Branch and Dr. Steve Gouge officiating. A celebration of Jim's life will be held at a later date due to the current health crisis in our country. Words of comfort Jim Gouge’s name and then you may sign his guestbook. Webb Funeral Home is honored to be serving the Gouge family. Mr. Gouge’s obituary has also been posted on Facebook for viewing.

The family of Jim Gouge created this Life Tributes page to make it easy to share your memories.

Send flowers to the Gouge family.