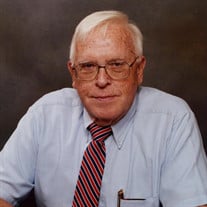 John Richard Johnson, age 87, of the Three Mile community, died Monday, September 21, 2020, at his home. Born on March 9, 1933, on Squirrel Creek in Frank, NC, he was the son of the late Dewey S and Shelton Braswell Johnson. John was preceded in death by his parents, sisters; Ruby Johnson and Mabel Pascoe and brothers; Bill Johnson and Nils Johnson. John moved with his family to Baltimore, MD, where he attended Mergenthaler School of Printing, a vocational high school, which led to his career as a printer. His family moved to Pine Branch in Mitchell County, where he finished high school at Harris High, class of 1951. He worked as a printer in Spruce Pine, NC, until he was drafted during the Korean War. He then worked as a printer at Fort Benning, GA, for two years. He married Emma Jean Buchanan in 1956. His career took them to Boone, Morganton, and Wilkesboro, where he became a teacher of printing and graphic arts at Wilkes Vocational Center. He continued his education via night classes, earning a Bachelor’s and Master’s degree in Psychology from Appalachian State University, and served as guidance counselor at Avery County High School. Forever curious, he also pursued continuing education in forensics, writing, photography, public speaking, welding, music, locksmithing, and repair of typewriters and small engines. He appointed himself morale director in social situations, always positive, encouraging and uplifting. He loved practical jokes, and all the neighborhood enjoyed his sense of humor. John often introduced himself to strangers by telling a joke. He would take delight in how long he could keep a wrong number caller talking on the phone. After retiring from Avery County Schools, he volunteered with Hospice, taught adults to read, raised emus, and pursued creative woodworking and many other endeavors. Left to cherish his memories are his wife; Emma Jean Buchanan Johnson, his daughter, Pandora Riggs; sons Curtis, Jeff, and Brian Johnson, five grandchildren, four great grandchildren, and many other relatives, friends, and acquaintances. In lieu of flowers, the family encourages donations to your personal favorite charities and random acts of kindness in honor of the life of John Richard Johnson. A celebration of his life will be planned at a later date when all may attend. Words of comfort may be e-mailed to the family by going to our website; www.webbfh.com., selecting John Johnson’s name, then you may sign his guest book. Webb Funeral Home has been entrusted with the arrangements for Mr. Johnson and is honored to be serving the Johnson family. John’s obituary has also been posted on Facebook for viewing.

John Richard Johnson, age 87, of the Three Mile community, died Monday, September 21, 2020, at his home. Born on March 9, 1933, on Squirrel Creek in Frank, NC, he was the son of the late Dewey S and Shelton Braswell Johnson. John was preceded... View Obituary & Service Information

The family of John Johnson created this Life Tributes page to make it easy to share your memories.

Send flowers to the Johnson family.