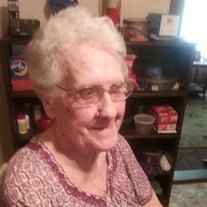 Julia Thomas McClellan, age 98, of McClellan Drive in Spruce Pine, died Saturday, March 9, 2019 at Willow Ridge Rehab and Living in Rutherfordton. Born on March 22, 1920 in Mitchell County, she was the daughter of the late Wilburn and Charlotte Burleson Thomas. In addition to her parents, she was also preceded in death by her husband, Paul W. McClellan who passed away in 1986. She was also preceded in death by her sons; Paul McClellan, Jr. and Ricky Lee McClellan; her daughter, Opal Lee McClellan; and nine brothers and sisters. Mrs. McClellan was a member of the Gouges Creek Baptist Church. She loved the Lord, her family and people. She enjoyed singing and sang in a quartet. She also enjoyed gardening, reading, and exercising. Left to cherish her memories are her daughters; Betty Kesterson of Rutherfordton, Shirley Carter of Morganton, Shelby Sprinkle of Marion, and Pauline McClellan of Spindale; her sons; Daniel Ray McClellan and wife, Nancy of Morganton and Douglas Earl McClellan and wife, Paula of Spruce Pine; her sister; Georgia McClellan of Spruce Pine; there are sixteen grandchildren and a number of great grandchildren and great great grandchildren; nieces and nephews. The family respectfully requests the honor of your presence at the funeral service for Julia McClellan on Tuesday, March 12, 2019 at 2:30 pm in the Chapel of Webb Funeral Home with the Rev. Tommy Thomas officiating. A time to support the family, share memories and receive friends will be on Tuesday, March 12, 2019 from 1:30 pm until 2:30 pm in the funeral home chapel. Interment will be in the Gouges Creek Baptist Church Cemetery. Words of comfort may be e-mailed to the family by going to our website; www.webbfh.com., selecting Julia McClellan’s name and then you may sign her guestbook. Webb Funeral Home of Spruce Pine is honored to be assisting the McClellan family. Mrs. McClellan’s obituary has also been posted on Facebook for viewing.

Julia Thomas McClellan, age 98, of McClellan Drive in Spruce Pine, died Saturday, March 9, 2019 at Willow Ridge Rehab and Living in Rutherfordton. Born on March 22, 1920 in Mitchell County, she was the daughter of the late Wilburn and Charlotte... View Obituary & Service Information

The family of Julia McClellan created this Life Tributes page to make it easy to share your memories.