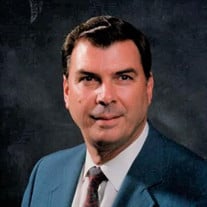 Not sure what to send?

Julian Davis Godwin, Jr. of Little Switzerland, passed away peacefully on Tuesday, April 12, 2022, after a long illness. He was born in Orlando, Florida on October 8, 1942. Davis is survived by his wife, Janice (Jann) Griffin Godwin and stepson, David Lee Carpenter of Little Switzerland , NC; his daughter Lesley Welch of Jacksonville, Florida and her children, Natalie Booth & Davis Welch; his daughter Ashly and her husband, Chris Jungers, of Tulsa, OK, and their children, Gabrielle and Blaine. Davis is preceded in death by his grandparents, Harry E. Hand and Ida MacDuff Hand of Orlando, Florida; his parents, Julian D Godwin Sr. and Harriet Hand Godwin; his sisters, Juliet Sharpe and Catherine Eldredge; and his former wife and mother of his two daughters, Charlotte Williams King. At the early age of 7, Davis and his family moved from Orlando to live with his grandparents in Little Switzerland, where he attended school in Spruce Pine and grew to love the mountains. He spent summers exploring every mountaintop, and winters hunting for rabbit, fox and grouse. He made many friends there and in his later years renewed these childhood friendships. His days spent hiking the mountain trails with his best friend, Jim Washburn, were the focus of the stories he loved to tell to anyone that would listen. In July 1960, Davis joined the US Air Force and served 4 years. Upon returning home, he and his family moved to Charlotte, NC. After marrying Charlotte Williams and raising two daughters, Davis worked as a plumber’s apprentice as the beginning of his future in the HVAC Industry. North Carolina Heating and Air Conditioning License #3073 held by Davis was issued in May of 1968. His reputation in the HVAC business grew while working as a manufacturer’s representative for J.G. Blackmon Associates. Davis was also a member of the American Society of Heating, Refrigeration and Air Conditioning Engineers (ASHRAE). After meeting and marrying Jann in 1982, they took the opportunity to begin their business future. They formed Davis Godwin Associates, Inc., serving the Charlotte area as manufacturer’s representative for computer room specialty equipment. Their main customers were Coca Cola Bottling Co., Consolidated and K-Mart Corporation. He was honored by being asked to go with the President of Coca Cola to West Virginia on a mission trip. While in Charlotte, Davis was a devoted member of Ascension Lutheran Church, where he served the congregation as a Lay Minister and Assistant Church Director. Serving as Chairman of Ascension’s Celebration of 60 years of Ministry in September 1991 was a highlight of his service. His church heart always remained with Ascension. Davis attended the Western North Carolina Lutheran Via De Cristo during the “Hurricane Hugo” weekend in September 1989. In 1993, Davis and Jann purchased their home in Little Switzerland. Renewing friendships with a school football buddy, Bill Hudson, they decided they would revive the Carolina Theatre in Spruce Pine. After purchasing the historic theatre building, Davis and Bill formed the Carolina Theatre Preservation Association and trademarked the Carolina Barn Dance. Their efforts were ahead of their time, and after Bill’s untimely death, Davis lost heart in that endeavor. Davis continued friendships with old schoolmates and enjoyed special times with Phillip Frye and others while participating in the Men’s Sunday School Class at First Baptist Church. His friendship and working relationship with Wallace Thompson, a talented HVAC technician, continued until Davis’ passing. While searching for ancestors’ burial grounds in Georgia, Davis found a forgotten graveyard of the Moreland family, his great-great-great grandparents, outside Byromville. A day of rejoicing for him! He was a member of the Sons of the American Revolution and was devoted to his heritage as an American. He dreamed of being a Cowboy, and riding the trails along with his pal, Gene Autry. Thanks and appreciation to the “Angels” that made it possible for Davis to spend his final days at home: Susan Topper, Megan Robertson and Louise McClellan. Their love and care will be remembered for many years. Also, thanks go out to the staff of Mitchell House, Brian Center and Hospice of the Blue Ridge, for their love and care for Davis as well. The interment and graveside service will be July 1, 2022 at 2 pm, in the Memorial Gardens at the Church of the Resurrection in Little Switzerland. A time to share memories and a Celebration of Davis’s Life will be held at Geneva Hall following the interment. Words of comfort may be e-mailed to the family by going to our website; www.webbfh.com, selecting Davis Godwin’s name and then you may sign his guestbook. Webb Funeral Home has been entrusted with the arrangements for Mr. Godwin and is honored to be serving the Godwin family.

Julian Davis Godwin, Jr. of Little Switzerland, passed away peacefully on Tuesday, April 12, 2022, after a long illness. He was born in Orlando, Florida on October 8, 1942. Davis is survived by his wife, Janice (Jann) Griffin Godwin and... View Obituary & Service Information

The family of Julian Davis Godwin, Jr. created this Life Tributes page to make it easy to share your memories.

Send flowers to the Godwin, family.