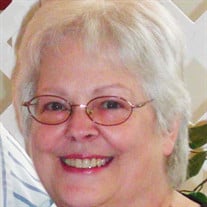 Kathryn Beatty was born in 1944 in Tampa, Florida to parents Elizabeth “Betty” and Harry Lantz and they moved to Spruce Pine in the mid - 40’s, where she graduated from Harris High School, class of 1962. Kathryn was a beauty pageant winner in several local and state pageants, including Miss Spruce Pine and the Apple Festival Pageant, she was also a contestant in the Miss America pageant in 1963. In 1969, while working at a bank in Idaho, she met the charming and dashing Jonathan Beatty, submarine sailor in the US Navy. After a short courtship they married on October 11, 1969. Jonathan and Kathryn shared fifty-two magical years together and had more love for each other on day 19,118 than they had on day 1. Jonathan and Kathryn moved to Spruce Pine in 1981 where they owned and operated several business in the downtown area, including, Lantz Jewelry, Studio B, JC Penney Catalog Store and the Spruce Pine Indoor Market. But her greatest accomplishment was being a Godly wife and mother, teaching others through her example how to love and be loved. After retirement she enjoyed playing Mahjong with the ladies of Swiss Pine Lake, reading Stephen King novels until the early hours of the morning, and playing games on her computer. She is survived by her husband, Jonathan Beatty, her two children, Jonathan Beatty II and Tracy Beatty Prue, four biological Grandsons and nine extended Grandchildren; her brother, Charles “Skippy” Lantz; cousins, nieces, nephews, and countless “adopted family” that she met and loved dearly over the years. Kathryn made lifelong friends and “adopted” new family members by loving, accepting, and treating others with kindness and grace. Her kindness and love has influenced many lives, her compassion was palpable and her smile was contagious. She will forever be treasured and cherished by all who were blessed to have known her. Kathryn died peacefully at home under the exceptional care of her loving husband and her two fur babies, Nemo and Toby. In lieu of flowers, the family requests that donations be made in Kathryn’s memory to the Hospice and Palliative Care Blue Ridge, 236 Hospital Drive, Spruce Pine, NC 28777. https://www.hospiceblueridge.com/make-a-contribution A memorial service will be hosted on February 26, 2022 at Webb Funeral Home located at 128 Roan Road, Spruce Pine, NC. The family will receive friends and family from 10:00 am to 12:00 pm and her memorial service will be at 2:00 pm in the Chapel of Webb Funeral Home. Words of comfort may be e-mailed to the family by going to our website; www.webbfh.com, selecting Kathryn Beatty’s name and then you may sign her guestbook. Webb Funeral Home has been entrusted with the arrangements for Mrs. Beatty and is honored to be serving the Beatty family. Mrs. Beatty’s obituary has also been posted on Facebook for viewing.

The family of Kathryn Beatty created this Life Tributes page to make it easy to share your memories.

Kathryn Beatty was born in 1944 in Tampa, Florida to parents...

Send flowers to the Beatty family.