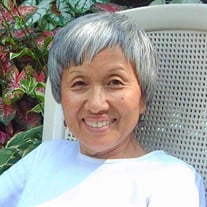 Keiko “Kay” Clarke, age 82, of Charlotte, NC, died Sunday, July 26, 2020 in Spruce Pine after a long term chronic illness. Born on September 17, 1937 in Tokyo, Japan, she was the daughter of the late Minao and Yoshiko Tomotsune and the middle of five siblings who grew up during and immediately after WWII. The hardships she endured during her youth made her the strong woman she was to become. Free spirited, she ventured solo to the USA in 1961 and became a student at Western Carolina University where she met her future husband Ray Clarke. She also studied at Furman University in Greenville, SC. Kay married Ray in 1965, and they lived in Raleigh, NC for nine years, raising their daughter Carol there. In 1975, they moved to Greensboro, NC, where they lived for 35 years. She became a naturalized citizen in 1979. They were avid campers, hikers, and nature lovers, spending many weekends on the Blue Ridge Parkway. Kay worked as a paralegal in loan administration with Bank of America for 30 years. After retiring they enjoyed cruising and traveling but eventually settled down at their cabin “Hikers Haven” in the Bear Den community near Spruce Pine, NC. Here they enjoyed an active circle of friends while hiking and exploring the mountains. She is preceded in death by her brother Masanori Tomotsune and sister Hisako Sekino, both of Tokyo. Left to cherish her memories are her husband Ray Clarke; her daughter, Carol Smith and husband Brad; sister Atsuko Terazawa; brother Takeshi Tomotsune and numerous nieces and nephews. No services are planned at this time. In lieu of flowers, donations can be made in Keiko’s memory to the Hero Fund for COVID Relief at www.aldersgateccrc.com/Philanthropy. Words of comfort may be e-mailed to the family by going to our website; www.webbfh.com, selecting Keiko Clarke’s name and then signing her guestbook. Webb Funeral Home is honored to be serving the Clarke family

The family of Kay Clarke created this Life Tributes page to make it easy to share your memories.

Send flowers to the Clarke family.