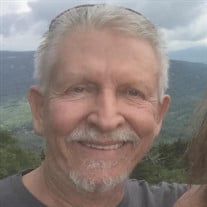 Luther Stamey, age 70, of Rockledge Road in Spruce Pine, the Swiss Pine Lake community, passed away Sunday, March 13, 2022 at his home. Born on August 28, 1951 in Mitchell County, he was the son of the late Ira and Belle Mace Stamey. In addition to his parents, he was also preceded in death by a brother, Mike Stamey. Luther was the owner of Stameys Grocery in Spruce Pine which was originally opened in 1951 by his father, Ira. In the mid 80’s, he opened his first video store, Flick Video. That led the way for a chain of more than twenty video stores throughout the Carolinas and they were recognized as one of the top video chain stores in the country. In his spare time, he enjoyed being at the lake and water skiing. Conversely, he like to see it snow as well. He also enjoyed traveling, attending his sons ball games and taking them to practices. His wife and sons were his pride and joy. Luther had a strong work ethic and he taught his sons that a strong work ethic was very important. Left to cherish his memory is his wife; Angie Benfield Stamey of the home; his sons; Lucas Stamey; Luke Stamey and wife, Adrian; and Zach Stamey and wife, Kait all of Spruce Pine; his grandson; Grey Stamey of Spruce Pine; and his sister; Carolyn Stamey of Hickory. A time to support the family, share memories, and receive friends will be Wednesday, March,16, 2022 from 10:00 am until 12:00 noon at Bear Creek Baptist Church. The funeral service will be Wednesday, March 16, 2022 at 12:00 noon at Bear Creek Baptist Church with the Rev. Bruce Cannon officiating. Entombment will be in the Mausoleum of Peace at Spruce Pine Memorial Cemetery The family would like to extend a ‘Thank You’ to Hospice and Palliative Care of the Blue Ridge and Hannah Hoilman-Montgomery for the wonderful care of Luther during his illness. In lieu of flowers the family requests that memorial donations be made to; Hospice and Palliative Care of the Blue Ridge, 236 Hospital Drive, Spruce Pine, NC 28777 www.hospiceblueridge.com Words of comfort may be e-mailed to the family by going to our website; www.webbfh.com, selecting Luther Stamey’s name and then you may sign his guestbook. Webb Funeral Home has been entrusted with the arrangements for Mr. Stamey and is honored to be serving the Stamey family. Mr. Stamey’s obituary has also been posted on Facebook for viewing.

Luther Stamey, age 70, of Rockledge Road in Spruce Pine, the Swiss Pine Lake community, passed away Sunday, March 13, 2022 at his home. Born on August 28, 1951 in Mitchell County, he was the son of the late Ira and Belle Mace Stamey. In addition... View Obituary & Service Information

The family of Luther Stamey created this Life Tributes page to make it easy to share your memories.

Luther Stamey, age 70, of Rockledge Road in Spruce Pine, the...

Send flowers to the Stamey family.