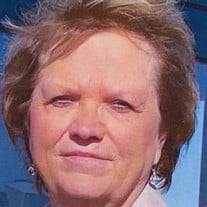 Whenever you hear or mention the name Melda, adjectives always seem to flood one’s mind. She was caring. She was honest. She was a fighter! Fortunate…this is the word that describes you if you were able to spend any amount of time with her. Melda had a listening ear and a compassionate, thoughtful heart. She always wanted to know how others were doing and what was new in their lives. At the very moment one was feeling down or an important event was happening, a call or text would appear or a hand-made card would arrive in the mailbox. She was a loyal, faithful friend who always appeared right when you needed her. Perhaps the most fortunate are the ones who called her Mom, Aunt, and Nana. She made sure her boys knew how much she loved them. She taught them about hard work, fun, and most importantly the love of God. Most Saturdays were spent in the hayfield, tobacco barn, or garden. Along with work, came fun. She was there for her boys as they decided to play sports, cheering them on from the sidelines. She also made sure her boys were active in church. As the boys grew into their teenage years, Melda and Alan became the youth leaders. These children also became like their own. Many teenagers have felt the love of these two incredibly compassionate and caring people who met when she was fifteen and had a devotion to and love for each other that most long to have. Alongside being a mother, being an aunt was just as important. She loved family, and it showed. These nieces and nephews sought out her advice as if she was their second mother. She was always there: ball games, proms, weddings, and the births of her great nieces and nephews. In her early fifties, she became “Nana.” She loved this name! Although everyone knew about her loyalty to family, it became even more evident as she took on this role. She had not only been there for her children, but she was also there for her grandchildren. Her grandchildren knew Nana would be sitting in the stands at their games, helping them prepare for milestones in their lives, and supporting them in any decision they made. They benefited from her unconditional love and support. She gave her life to serving and being there for them. Her honesty…when speaking on this topic one must smile or even laugh a little! Melda never held back on her thoughts on any given topic. The truth is she was just braver than the rest. She said what others were thinking, causing everyone to take a sigh of relief. This is why everyone respected and trusted her. We knew that she would tell us the truth! Thankfully, she did pass on this trait to at least one member of the family. As time passed, she faced the challenge of having cancer. People knew she was fighting this battle, but it never stopped her from showing up to all of life’s important events for children, grandchildren, and extended family. She never complained about the pain, the challenges, or the sickness. One can only imagine what it is like to fight such a horrible disease for fourteen years. As time progressed so did her cancer. Those who saw her in public will never know the battles she fought behind closed doors. She is now reunited with her mom and dad, Jo Etta and JD Hollifield, and her brother, Coy Hollifield. Joining her at a later earthly time will be her husband, Alan Biddix, and her children and grandchildren, Shane, Madison, and Sage Biddix; Dustin, Jessica, Levi, Grayson, and Tucker Biddix. A time to support the family, share memories, and receive friends will be Monday, March, 21, 2022 from 4:00 pm until 6:00 pm at Freedom Baptist Church. The funeral service will be Monday, March 21, 2022 at 6:00 pm at Freedom Baptist Church with the Rev’s. Cass Buchanan and Keyvan Buchanan officiating. Interment will be in the Greenlee Cemetery. The family would like to extend a ‘Thank You’ to Hospice and Palliative Care of the Blue Ridge and staff members; Alicia Cody, Ciji Dellinger, and Betty Pendley for the wonderful care of Melda during her illness. And also her special sister-in-law; Billie June Hollifield and best friend, Paula Duncan for their care of Melda, too. In lieu of flowers the family requests that memorial donations be made to; Hospice and Palliative Care of the Blue Ridge, 236 Hospital Drive, Spruce Pine, NC 28777 www.hospiceblueridge.com Words of comfort may be e-mailed to the family by going to our website; www.webbfh.com, selecting Melda Biddix’ name and then you may sign her guestbook. Webb Funeral Home has been entrusted with the arrangements for Mrs. Biddix and is honored to be serving the Biddix family. Mrs. Biddix’ obituary has also been posted on Facebook for viewing.

Whenever you hear or mention the name Melda, adjectives always seem to flood one&#8217;s mind. She was caring. She was honest. She was a fighter! Fortunate&#8230;this is the word that describes you if you were able to spend any amount of time... View Obituary & Service Information

The family of Melda Biddix created this Life Tributes page to make it easy to share your memories.

Whenever you hear or mention the name Melda, adjectives always...

Send flowers to the Biddix family.