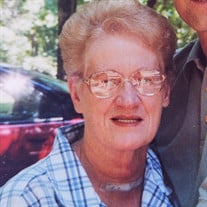 Nancy Corbett Clodfelter, age 82, formerly of Blanton Branch Road in Sylva, died Wednesday, November 25, 2020 at Brian Center Health & Rehab in Spruce Pine. Born on July 27, 1938 in Cleveland, OH, she was the daughter of the late Jack Edward and Ann Corbett. In addition to her parents, she was also preceded in death by her husband, John Houston Clodfelter, Sr. Also preceding her in death was her brother, Tom Corbett. Nancy retired following thirty years of service as an accountant for Esso/Exxon Oil in Houston, TX and Charlotte, NC. She was a member of the St. Patrick Catholic Church in Charlotte, NC and an active member of the Parkroad Baptist Church in Charlotte, NC. She was very active with the food banks in Charlotte. In her spare time, she was an avid reader. Left to cherish her memories are her son; John H. Clobfelter, Jr. of Sylva, NC; her daughter; Cheri Lynn Tate and husband, Terry of Lynchburg, VA; her grandchildren; Dana Tate, Samantha Tate, Stephen Tate, Lindsey Nichol Clodfelter and Lauren Elizabeth Clodfelter; and her great grandchildren; Christopher Bryan Ford and Alden Ford. No services are planned at this time. Words of comfort may be e-mailed to the family by going to our website; www.webbfh.com., selecting Nancy Clodfelter’s name and then you may sign her guestbook. Webb Funeral Home has been entrusted with the arrangements for Mrs. Clodfelter and is honored to be serving the Clodfelter family. Mrs. Clodfelter’s obituary has also been posted on Facebook for viewing.

The family of Nancy Clodfelter created this Life Tributes page to make it easy to share your memories.

Send flowers to the Clodfelter family.