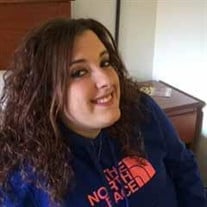 Natasha Lynn Campbell Hullett, age 30,of Dale Road in Spruce Pine, died Sunday, October 14, 2018 at Blue Ridge Regional Hospital in Spruce Pine. Natasha was born on April 5, 1988 in Washington County, TN. She was preceded in death by her grandfathers; Larry Van Smith and Chuck Boone. Natasha was employed by Blue Ridge Regional Hospital in Spruce Pine. She was proud to be nurse and considered those that she worked with as part of her family. She was also proud to be a mother and loved spending time with her family. She enjoyed traveling, riding motorcycles and loved cats. Left to cherish her memories are her husband; Nick Hullett; her daughter; Paige Hullett of the home; her parents; Mechelle and Barry Boone of Spruce Pine and Scotty and Nikki Campbell of Bakersville; her mother-in-law; Brenda Wilson of Burnsville and her father-in-law; Wayne Hullett of Burnsville; her brothers; Austin Boone and finance, Danielle of Bakersville; Austin Campbell and Avery Campbell both of Bakersville; her sister; Savannah Campbell and fiancé, Michael of Bakersville; her grandparents; TM and Madeline Campbell of Bakersville; Loretta and Mike Runion of Spruce Pine and Carolyn Boone of Spruce Pine; great grandmother; Dorothy Smith of Spruce Pine; her niece; Reagan Boone of Bakersville; numerous aunts, uncles, and a host of friends. The family respectfully requests the honor of your presence at the funeral service honoring the life of Natasha Hullett on Wednesday, October 17, 2018 at 11:00 am at the Berry Chapel Baptist Church with the Rev’s. Steve Williams and Nathan Silver officiating. A time to support the family, share memories and receive friends will be on Tuesday, October 16, 2018 from 5:00 pm until 8:00 pm at Webb Funeral Home. Interment will be in the Spruce Pine Memorial Cemetery. The family would like to extend special ‘Thanks’ to; Shana and Richard McKinney, Amber Sluder, Tiffany Shuford, Cynthia Wilson, Scooter Jones; her extended family at Blue Ridge Regional Hospital, and the staff of Hospice and Palliative Care of the Blue Ridge for their wonderful care and concern during Natasha’s illness. In lieu of flowers the family requests that memorial donations be made to either; Hospice and Palliative Care of the Blue Ridge or Toys for Tots. The family will be meeting at the home of Barry and Michelle Boone, 16 South Ridge Drive in Spruce Pine. Words of comfort may be e-mailed to the family by going to our website; www.webbfh.com., selecting Natasha Hullett’s name and then you may sign her guestbook. Webb Funeral Home of Spruce Pine is honored to be assisting the Hullett family. Natasha’s obituary has also been posted on Facebook for viewing.

The family of Natasha Campbell Hullett created this Life Tributes page to make it easy to share your memories.

Send flowers to the Hullett family.