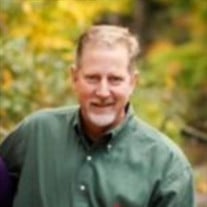 Richard Baker, 55, of Spruce Pine, went to his heavenly home on November 25, 2020. He was preceded in death by his father, Richard H. Baker. Richard’s deep and abiding Christian faith was evident in the life he lived, and in his kind, self-effacing interactions with everyone he encountered. He lived a life of service to his family, friends, and those in his community, and was an active member of Trinity Episcopal Church. Richard lived his entire life in Spruce Pine. He was a graduate of NC State University and owned and operated a local family business for many years. For the past several years, he and his wife, Dee, took pleasure in gardening and beekeeping. He enjoyed his mountain environs to the fullest. He could easily identify every surrounding mountain, ridge, creek, and trail, and most any plant you would find. He enjoyed hiking and backpacking in his earlier years, many times in the ice and snow with young son John in tow. He had an insatiable curiosity about many things in this world, which often led to long, engaging hours of after-dinner conversations centered on philosophy, anthropology, politics, and religion, with references to ancient history, of which he was well-read. His storytelling skills were unsurpassed. Friends and family were often regaled with tales from his earlier years, laced with his perfect wit and humor. During the two-and-a-half years of his illness, as throughout his life, Richard enjoyed visits and outings with family and his many close friends. He took joy in a special surprise visit from his new great-niece during the last few days of his life. Richard was a devoted husband, father, son, and brother. He cherished his family and delighted in his two young daughters and time spent with them on walks, fishing, putt-putt, and trips to the beach. Left to cherish his memory are his wife of 21 years, Dee Medford-Baker; beloved children, John Baker, Loren Baker, and Leah Baker; mother, Willa Baker Ward; sister, Susan Fanning (Ric); nephew, Will Fanning; and niece, Katy Fanning. Memorial contributions may be made to; Hospice and Palliative Care of the Blue Ridge, Inc., 236 Hospital Drive, Spruce Pine, NC 28777, or through the website: www.hospiceblueridge.com. A family service of remembrance will be held in the spring. Words of comfort may be e-mailed to the family by going to our website; www.webbfh.com., selecting Richard Baker’s name and then you may sign his guestbook. Webb Funeral Home has been entrusted with the arrangements for Richard and is honored to be serving the Baker family. Richard’s obituary has also been posted on Facebook for viewing. ~~~~~~~~~~~~~~~~~~~~~~~~~~~~~~~~~~~~~~~~~~~~~~~~~~~~~~~~~~~~~~~~~~~~~~~~~ PLEASE MAKE MEMORIAL CONTRIBUTIONS TO: Hospice and Palliative Care of the Blue Ridge 236 Hospital Drive Spruce Pine, NC 28777 www.hospiceblueridge.com ~~~~~~~~~~~~~~~~~~~~~~~~~~~~~~~~~~~~~~~~~~~~~~~~~~~~~~~~~~~~~~~~~~~~~~~~~

Richard Baker, 55, of Spruce Pine, went to his heavenly home on November 25, 2020. He was preceded in death by his father, Richard H. Baker. Richard&#8217;s deep and abiding Christian faith was evident in the life he lived, and in his kind,... View Obituary & Service Information

The family of Richard Baker created this Life Tributes page to make it easy to share your memories.

Richard Baker, 55, of Spruce Pine, went to his heavenly home...