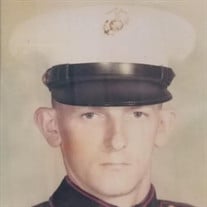 Richard Lee Brewer, age 74, of the Newdale Community passed away on April 29, 2022 at Smokey Ridge Health & Rehab in Burnsville. He was the son of the late Howard Brewer and the late Effie Sparks Brewer. He was also preceded in death by his sisters; Patricia Brewer Glenn, Flo Brewer Lipps; his brother; Roger Brewer, and his niece; Martha Glenn Garfalo. Richard was a veteran of the Vietnam War, having served in the United States Marine Corps. He was a supervisor at Hickory Springs and had also been employed by O.M.C. Richard was an outdoorsman that enjoyed hiking and fishing. Richard is survived by his loving wife of fifty years; Trula Burleson Brewer; his daughter; April Truett and husband, Jeff of Newdale; his grandsons; William Levi Truett and Isaac Truett; his brothers; Phillip Brewer and wife, Jo Ellen of Hudson, and Larry Brewer and wife, Elaine of Burnsville; his sisters-in-law; Marie Willis and husband, Roger of Spruce Pine, and Wanda Henline and husband, Wayne of Spruce Pine. Also surviving is his special niece; Allison Duncan of Spruce Pine, his special nephew; Rev. Adam Brewer of Bakersville, special friend, Kathy Laws of Burnsville, and his little dog, Jack. Several other family members, neighbors and friends also survive, including his nieces; Kimberly Willis Yelton, Rhonda Chapman, and Sherri Reece and his nephews; Andrew Henline, Brian Brewer, Samuel Lipps, Jerry Lipps, Phillip Joe Brewer, Timothy Brewer, Matthew Brewer, Mike Glenn and Bobby Glenn. A funeral service will be held on Monday, May 2nd at 11:30 am in the Chapel of Webb Funeral Home in Spruce Pine, with Reverend Adam Brewer officiating. The family will receive friends one hour prior to the service. Burial will be in the Newdale Presbyterian Church Cemetery with Military Graveside Rites by Sgt. E.L. Briggs Chapter #57 D.A.V. Pallbearers will be Bobby Blackburn, Jason Gilley, William Truett, Brian Brewer, Jerry Lipps, and Samuel Lipps. Richard's family would like to extend a special thank you to the staff of the Charles George VA Medical Center and the staff of Hospice and Palliative Care of the Blue Ridge for their care and compassion. In lieu of flowers, donations in Richard's honor may be made to: Hospice and Palliative Care of the Blue Ridge, 236 Hospital Drive, Spruce Pine, N.C. 28777 www.hospiceblueridge.com or Veterans Healing Farm, 38 Yale Road, Hendersonville, N.C. 28739 www.veteranshealinghome.org Words of comfort may be e-mailed to the family by going to our website; www.webbfh.com, selecting Richard Brewer’s name and then you may sign his guestbook. Webb Funeral Home has been entrusted with the arrangements for Mr. Brewer and is honored to be serving the Brewer family. Mr. Brewer’s obituary has also been posted on Facebook for viewing.

Richard Lee Brewer, age 74, of the Newdale Community passed away on April 29, 2022 at Smokey Ridge Health & Rehab in Burnsville. He was the son of the late Howard Brewer and the late Effie Sparks Brewer. He was also preceded in death by his... View Obituary & Service Information

The family of Richard Brewer created this Life Tributes page to make it easy to share your memories.

Richard Lee Brewer, age 74, of the Newdale Community passed away...

Send flowers to the Brewer family.