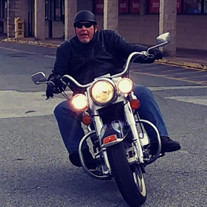 Robert D. Eason (Boog/ Bobby) of Bakersville formerly of Braintree and Weymouth MA, died peacefully at home on December 20, 2019. He was 55 years old. He is survived by his loving and devoted wife Moira, and his best friends Georgie and Izzy all of Bakersville. He is also survived by his daughters; Kelli Kelly (Jim) and Dena Appleton (Corey Melville), Granddaughter; Hannah, his Sisters; Danielle Elbehiry and Heather Eason, his brother-in-law; Moataz Elbehiry, as well as his beloved nieces and nephews; Brandin Balurdi, Harley Silva, Dante and Bella Elbehiry, and Chris Appleton. His amazing in-laws; Ann McCarthy-Egan and Tom Egan, Megan McCarthy-Egan, and Molly (Brian) Noerenberg, who taught him the real meaning of family and unconditional love. He was the son of Robert Eason, and the late Linda Matthews Eason. Bobby was proud to be Northern born but Southern by choice. He had found peace and happiness roaming and roaring through the mountains of North Carolina on his beloved Shovelhead. He was fiercely devoted and protective of his wife, family and friends. He was known as a man who would do anything to help a friend, a true Brother. He was a mountain of a man who became a man of the mountains. A gathering of remembrance will be on Monday, December 23, 2019 at Webb Funeral Home beginning at 5:00 pm with personal remembrances and stories about Bob’s life at 6:00 pm. There will be a celebration of life later in the spring, in the style he wanted on the Parkway. A memorial service in Massachusetts will be held at a date to be determined. Special thanks to; Neil and Jan Davis, James Johnson, Allan and Kathy Ledford, and Michael Clougherty for their love and support for Bob and Moira. Thank you to Tiffany, Jennifer, April, Cindy, Sarah, and especially Kelsey McKinney for the loving and gentle care they provided Bob. Donations in Bob’s memory can be made to; Hospice and Palliative Care of the Blue Ridge, 236 Hospital Drive, Spruce Pine, NC 28777. www.hospiceblueridge.com Words of comfort may be e-mailed to the family by going to our website; www.webbfh.com., selecting Robert Eason’s name and then you may sign his guestbook. Webb Funeral Home of Spruce Pine is honored to be assisting the Eason family. Robert’s obituary has also been posted on Facebook for viewing. = = = = = = = = = = = = = = = = = = = = = = = = = = = = = = = = = = = = = = = = = = = = = = = PLEASE MAKE DONATIONS TO: Hospice and Palliative Care of the Blue Ridge 236 Hospital Dive Spruce Pine, NC 28777 www.hospiceblueridge.com

Robert D. Eason (Boog/ Bobby) of Bakersville formerly of Braintree and Weymouth MA, died peacefully at home on December 20, 2019. He was 55 years old. He is survived by his loving and devoted wife Moira, and his best friends Georgie and Izzy... View Obituary & Service Information

The family of Robert 'Boog' Eason created this Life Tributes page to make it easy to share your memories.