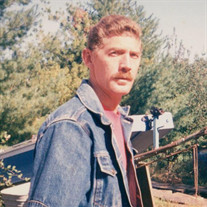 Robert Carlton Gouge, age 68, of Dierdorf Lane in Morganton, died Saturday, December 22, 2018 at his home. Born on April 24, 1950 in Avery County, he was the son of the late Robert Gordon and Margaret Louise Woody Gouge. In addition to his parents, he was also preceded in death by his wife, Carolyn Jean Gouge who passed away in 1999. He was also preceded in death by a son, Michael Shane Gouge. Robert was a member of the McDowell Independent Presbyterian Church in Morganton. He was a veteran of the U.S. Army. He was an avid hunter and fisherman and loved his grandchildren which were his passion and love. Left to cherish his memories are his son; Jonathan Gouge of Morganton; his daughters; Heidi Deal and husband, Barry of Morganton and Holly Gouge of Morganton; his brother; Charles Gouge of Morganton; his sister; Carolyn Murphy and fiancé, Odell Barnett of Bean Station, TN; there are twelve grandchildren. The family would like to recognize, Gilbert Norman who was a lifetime friend of Robert that was there for him in good times and bad. The family respectfully requests the honor of your presence at the funeral service honoring the life of Robert Gouge on Wednesday, December 26, 2018 at 1:00 pm in the Chapel of Webb Funeral Home, 128 Roan Road, Spruce Pine, NC 28777 with Pastor Dennis Carswell officiating. A time to support the family, share memories and receive friends will be on Wednesday, December 26, 2018 from 12:00 pm until 1:00 pm in the funeral home chapel. Interment will be in the Whites Memorial Baptist Church Cemetery, 9172 U.S. Hwy. 19-E, Newland, NC, 28657. The family would like to extend ‘Special Thanks’ to Hospice of Burke County for their wonderful care of Robert. Words of comfort may be e-mailed to the family by going to our website; www.webbfh.com., selecting Robert Gouge’s name and then you may sign his guestbook. Webb Funeral Home of Spruce Pine is honored to be assisting the Gouge family. Mr. Gouge’s obituary has also been posted on Facebook for viewing.

Robert Carlton Gouge, age 68, of Dierdorf Lane in Morganton, died Saturday, December 22, 2018 at his home. Born on April 24, 1950 in Avery County, he was the son of the late Robert Gordon and Margaret Louise Woody Gouge. In addition to his... View Obituary & Service Information

The family of Robert Gouge created this Life Tributes page to make it easy to share your memories.

Send flowers to the Gouge family.