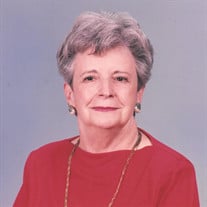 Ruth Pitman Buchanan, age 97, of Fairway Lane in Spruce Pine died January 4, 2019 at the Mitchell House. Ruth was born on November 13, 1921 in Mitchell County, NC and was the daughter of the late William M. and Etta Ward Pitman. In addition to her parents, she was preceded in death by her husband; Glen James Buchanan in 1983, and her sisters Marie Jarrett, Georgie Fisher, Doris Pitman, and Mary Mace. Left to cherish her memory is her daughter, Louise B. Hembree (Randy) of Spruce Pine; her grandson, Justin Hembree of Weaverville, NC; her brother-in-law John Mace of Marion, NC; and numerous nieces and nephews. Until her passing, Ruth was the oldest member of Spruce Pine First Baptist Church, where she loved to worship, serve and fellowship with her friends until her decline in health prevented her participation. She served as a Sunday School Teacher, Baptist Training Union Leader, circle leader, and on numerous committees. For many years Ruth and Glen owned and managed Beaver Creek Grocery in Spruce Pine; however, the store was better known by their faithful customers as Glen and Ruth’s Store. Since these were the days before credit cards, customers were able to charge their groceries until payday with no interest. Glen developed a severe case of rheumatoid arthritis at an early age. Ruth became his primary caregiver while also managing the grocery store. The store closed in 1977 due to the construction of the 19E bypass. She and Glen along with their longtime customers were saddened to see this “mom and pop” establishment close. After the store closed, Ruth began working at the Army Store in Spruce Pine and enjoyed her work until she retired. She was a loyal employee and took pride in helping her customers find the best value. After retiring, Ruth volunteered at both Spruce Pine Community Hospital and Brian Center for over twenty years. One of her prized possessions was a plaque she received from the hospital recognizing her service. She was a member of the Red Hats, Mitchell County Homemakers, a Saturday Morning Coffee Club, and the Elderberries at her church. Ruth made friends easily and had many close friends which she continued to socialize with until her health declined to the point that she was unable to do so. After spending time with her friends, she would say, “While I’m with my friends I don’t have any pain.” Ruth and her family love and wish to thank her long-time caregiver, Martha Blanton, as well as Suzanne Dayton, Pat Buchanan, and Sandra Woody. The family would also like to extend special thanks to Hospice and Palliative Care of the Blue Ridge and to the staff of the Mitchell House for their care and support. Special thanks are also extended to Roger and Nancy Hinshaw, Ann Shortinghouse, and Weldon Greene, all from First Baptist, for their frequent visits and dinners each Wednesday. A burial service will be held at Spruce Pine Memorial Cemetery on Wednesday, January 9, 2019 at 11:30am. Immediately following the burial service, a memorial service celebrating Ruth’s life will be held at 12:30pm at Spruce Pine First Baptist Church. A reception with time to support the family, receive friends, and share memories will follow in the church social hall. In lieu of flowers, please consider a memorial donation to Hospice and Palliative Care of the Blue Ridge, 236 Hospital Drive, Spruce Pine, NC 28777. Words of comfort may be emailed to the family by visiting the website, www.webbfh.com and selecting Ruth P. Buchanan’s name. Webb funeral Home of Spruce Pine is honored to be assisting the family. Mrs. Buchanan's obituary has also been posted on Facebook for viewing.

Ruth Pitman Buchanan, age 97, of Fairway Lane in Spruce Pine died January 4, 2019 at the Mitchell House. Ruth was born on November 13, 1921 in Mitchell County, NC and was the daughter of the late William M. and Etta Ward Pitman. In addition... View Obituary & Service Information

The family of Ruth Buchanan created this Life Tributes page to make it easy to share your memories.

Send flowers to the Buchanan family.