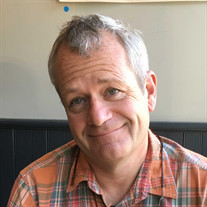 Stephan (“Steve”) van der Vorst's extraordinary life was cut short suddenly on August 9, 2018. Steve was born on November 26, 1962 to parents Martinus Cornelis Petrus and Hermina Louisa Gerdina in Amsterdam, the Netherlands. The family later moved to the town of Boxtel, where Steve spent his later childhood years before attending the University of Amsterdam. An adventurer at heart, Steve signed on to the Camp America program in 1985 to become a camp counselor in the US. He accepted a position in Amenia, New York at Camp Dunnabeck, a residential summer camp for children with dyslexia. Although he traveled the world, throughout the next nine summers, he returned to the camp, moving up from counselor to assistant program director to waterfront director. It was here that Steve developed his lifelong passion for working with dyslexic children and here that, in 1990, he met the love of his life, Susie, who worked at the camp as a tutor. The couple was married in 1993 and moved to St. Croix, U.S Virgin Islands, where their family expanded to include daughter Marguerite, and later, daughter Anina and son Olson after they relocated to Asheville in 1995. The couple’s commitment to working with children with dyslexia brought them to Durango Mountain Camp in Colorado in 2002. It was here that they hit upon the idea of starting their own dyslexia-focused residential summer camp. The van der Vorsts purchased a duplex on an 80-acre site outside Bakersville, North Carolina and began turning it into Camp Spring Creek. Since starting out with three campers in 2003, the camp grew steadily, reaching more than 50 this summer. Equally hardworking and fun-loving, Steve had found the perfect occupation in running the camp. For the past 16 summers, Steve could be found each day leading campers in announcements, room inspections and the delivery of ‘buddy beads,’ as well as leading activities and mentoring both campers and counselors. During the winter, he could be found improving, expanding and renovating the camp property, designing and building everything from cabins to fences to pool houses. He was never without a project in progress. He managed the camp facilities and counselor hiring, training, and supervision with ease, humor, and grace. More importantly, he worked with the campers to develop their self-confidence and independence, all while providing them with unforgettable experiences and lots of fun and laughter. To Camp Spring Creek campers, Steve was the “camp dad,” who got to know each child personally, recognizing their unique gifts and potential. His endless patience, humor, and sincerity added a dimension to the camp that truly made everyone feel included and valued. Steve had a way of making everyone around him feel instantly comfortable. Although he was loved by many, Steve’s own family always came first. A loving and devoted husband and father, Steve was happiest with Susie and his kids, whether they were working together at camp or enjoying the many things they loved to do together as a family. Steve is survived by Susie, his loving wife of 25 years, daughters Anina and Marguerite and son Olson, mother Hermina (“Mimi”) van der Vorst-Pieters and brothers Denis (Jolanda), Carlos (Lilian), and René and sister Suus (Luc) as well as nieces and nephews Daan, Bart, Tommy, Eric and Julia. The van der Vorst family would like to thank the staff of Mission Hospital’s cardiac intensive care unit and the Mitchell County First Responders team for their assistance during a very difficult time. In lieu of flowers, donations are being accepted for Camp Spring Creek to honor Steve’s vision and legacy at camp. Contributions can be made at www.campspringcreek.org/donate or Camp Spring Creek, 774 Spring Creek Road, Bakersville, NC 28705. In honor of Steve’s life and commitment to Camp Spring Creek, a Beautification Day will be held at camp on November 24.

The family of Stephanus Henricus Sylvester van der Vorst created this Life Tributes page to make it easy to share your memories.