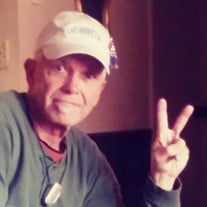 Steven Mark Wynn, retired U.S Army Corps of Engineers Hydro Electric Operations Manager and U.S. Army Vietnam Veteran, passed away on October 1, 2021 at his home in Spruce Pine, NC. Steve was the son of Felton Billy and Vera Lee Wynn, born in Mecklenburg Co. in Charlotte, NC on February 10, 1951. Steve's life will be cherished by his daughter, Ali Nicol, son, Steven Mark Wynn II, grandsons, Willow J. Fields and Ananda T. Velo and granddaughter, Mirabella R. Velo. Further family members are Steve's sisters, Freda A. Wynn, Karen and husband Larry Graham of North Augusta, SC and Rhonda and husband Rick Perez of Indialantic, FL. And his brother, Felton H.Wynn of Spartanburg, SC. With nieces, Gena L. Beatty and Kara C. Bailey (d. 2001) and nephew, Donnie Shaw. Another significant person for Steve includes his lifelong friend and ex-spouse from 34 years of marriage, Emma Wynn of Boone, NC. And his best friends, his dogs, Choco and Diamond and cat, Ren. Steve will be remembered for his contributions in many areas of life. After attending Harding High School in Charlotte, NC, he immediately enlisted into the U.S. Army. He served in the 101st Airborne Unit as a Movement Specialist from May of 1969 – Feb. of 1971 and was awarded with a National Defense Service Medal, Sharpshooter Badge (M-14 Rifle), Republic of Vietnam Campaign Medal and a Vietnam Service Medal. He returned and married his childhood friend, Emma J. Bowman and started a family. He continued his education at Gaston Jr. College and completed his electrical technician certification and began his longtime employment (1977-2013) with the U.S. Army Corps of Engineers ending his career as the Supervising Manager of Power Project Operations for the Savannah District,including becoming a master diver. His job moved him and his family around the Southeast for many years. Steve enjoyed exploring new places and people and made friends easily. One of his main passions was anything athletic, this motivated him to join in all types of teams from his Salvation Army football league as a child, JV and Varsity basketball teams, High School Varsity football to pick-up soccer games in the park later in his life. He continued into his adulthood playing softball, volleyball and coed soccer leagues and also excelled in individual activities such as long distance bicycling and marathon running, golf, and roller blading. However, his true heart for sports was in his coaching. He coached on local, state and regional levels with teams winning state championships, playing state teams at region camps, mini-soccer tournaments, teaching soccer at Charlotte Catholic Camps in the summer as well as various clinics throughout South Carolina. He volunteered to help coach T.L. Hanna High School girl's soccer team for many years enjoying the spirit of teamwork. He added to any team he helped by his famous motivational speeches. And he always was willing to pick kids up so they could play and take them home. He has left behind a legacy of players coaching others players now, touching many athletes lives through his love of the game. He truly was a great athlete, ending his days hiking in the Appalachian mountains with his dog Choco. After retirement, he found his forever home in Spruce Pine and continued his life long learner attitude by keeping bees, growing edible mushrooms, and visiting with his grandchildren and daughter and being near his son, Mark. He loved the Blue Ridge Mountains, enjoying all the wildlife walking in his backyard, the bears and “his deer “he would feed and connecting to nature by drinking the mountain spring water running through his property, keeping a log of the snow fall in the winter, and watching the hummingbirds feed from his porch gave him the peace he always longed for in his life. He was a member of the Clearwater Baptist church in Anderson, SC and practiced meditation throughout his life. A service remembering and honoring him will be held at the Webb Funeral Home in Spruce Pine, NC on October 16, 2021 at 3:00 p.m. If you plan to attend, come prepared to share a memory and light a candle. There is a donation option to help family with costs associated in lieu of flowers. A celebration of his life will follow the service at his home for any who would like to attend. The service will be live streamed at https://www.oneroomstreaming.com/ Event ID: WebbFH password:DQAQM8 Words of comfort may be e-mailed to the family by going to our website; www.webbfh.com, selecting Steven Wynn’s name and then you may sign his guestbook. Webb Funeral Home has been entrusted with the arrangements for Mr. Wynn and is honored to be serving the Wynn family. Mr. Wynn’s obituary has also been posted on Facebook for viewing.

The family of Steven M. Wynn created this Life Tributes page to make it easy to share your memories.