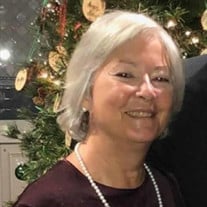 This is the story of Terri Patrice Houston Rawlins, beloved wife of Ricky Rawlins and oldest child of Clay and Naomi Houston. She was a wonderful and caring woman who was loved and will be missed by all who had the privilege of knowing her. Her story began January 8, 1956 in Nashville Tennessee when God loaned her to this world. Her story ended on February 22, 2021 in Monroe, Georgia where she died following a heart attack. The sixty-five years she spent on this earth were filled with a lot of adventure beginning with life as a “military brat”. The family often moved as she grew up and she experienced life in several locations including Hawaii. This fostered in her a spirit of adventure which defined her throughout her lifetime. From an early age she developed a love of nature and all God’s creation. Coming home to the North Carolina Mountains on vacations with her family was one of her greatest pleasures. The mountains were and provided an anchor for her soul. While her father was stationed in Atlanta, Georgia Terri graduated from Stone Mountain High School and then attended Emory University. She met her husband, Ricky, soon afterward and Georgia became her home until her death. Together, Terri and Ricky were the definition of soul mates. Both enjoyed the adventures of being out of doors in God’s beautiful world and spent every opportunity camping, canoeing, white water rafting, spelunking (crawling around in caves) and especially fishing. Terri was ready at the “drop of a hat” to go fishing! Although she had no children she loved her nieces and nephews unconditionally and taught them about nature and enjoying the world around them. From fishing to learning to rappel, from camping to caving, skipping rocks in the creek or just looking for heart shaped stones – when Aunt Terri was around they were in for an adventure. She never missed a birthday or Christmas and was always finding (or making) special gifts that perfectly fit the recipient. The news of an expected baby in the family always brought out the knitting needles and the production of a baby blanket for the new arrival. Countless loaves of banana bread were baked in her kitchen and gifted to friends and neighbors. She grew a “backyard” garden every summer and preserved the harvest to share as gifts. Throughout most of her life Terri dealt with the challenge of Type I diabetes. Other health challenges developed including breast cancer. She never let any of this deter her love of life and her love of caring for others. Terri was preceded in death by her grandparents Wes and Hettie Houston of Henson Creek, Floyd and Lena Dorris of Nashville, Tennessee, and her brother, Tom. Those left to cherish her memory in addition to her husband, Ricky, of the home are her parents, Clay and Naomi Houston, Henson Creek, Newland, NC; her brother, Sam, Huntsville, Alabama; nephews Patrick (Krysta) Houston, Johnson City, Tn.; Ethan Houston, Johnson City, Tn. Niece, Brittanie Houston, Cambridge, Minnesota; Great-nieces Jovi Geisler, Olivia and Natalie Houston and great-nephew, Henry Houston; and sister-in-law, Peggi Houston, Johnson City, Tennessee. Relatives mourning her loss who reside in Georgia include: Mother-in-law, Becky Rawlins; brother-in-law, Tim (Rhonda) Rawlins; sisters-in-law, Robin(Steve) Walker; Tracy (Frazier) Wilson; Nieces: Brittany (Nikolai) Koretski, Kelli (Michael) Ballard; Stephanie (Thomas) Jackson; Erinn (Rick) Goblin; Tori(Scott) Frazier; nephews, Chris (Gizzy) Rawlins; Travis Rawlins; Caleb Walker; and Chance Parker. 10 great-nieces and nephews also survive. Terri is also survived by a host of cousins, her aunts, Peggy Burgess and Judy Dorris of Nashville, Tennessee, and Uncles, Floyd (Barbara) Dorris Summerville. SC, and Grady Dorris, Pleasant View, Tennessee, and her beloved boxer, Rocky. Memorial services for Terri Patrice Houston Rawlins will be held on Saturday, March 6, 2021 in the chapel of Webb Funeral Home, Spruce Pine, North Carolina, with Pastor John Howard officiating with visitation from noon until 1pm and services at 1pm. Her cremains will be interred at a later date in the Houston Cemetery next to her brother. In lieu of flowers donations to the American Diabetes Association are requested. Contributions may be made by mail: American Diabetes Association, PO Box 7023, Merrifield, Virginia 22116-7023 or by visiting their website at www.diabetes.org and click on “donate”. Words of comfort may be e-mailed to the family by going to our website; www.webbfh.com, selecting Terri Rawlins’ name and then you may sign her guestbook. Webb Funeral Home has been entrusted with the arrangements for Mrs. Rawlins and is honored to be serving the Rawlins family.

This is the story of Terri Patrice Houston Rawlins, beloved wife of Ricky Rawlins and oldest child of Clay and Naomi Houston. She was a wonderful and caring woman who was loved and will be missed by all who had the privilege of knowing her. Her... View Obituary & Service Information

The family of Terri Patrice Rawlins created this Life Tributes page to make it easy to share your memories.

This is the story of Terri Patrice Houston Rawlins, beloved wife...

Send flowers to the Rawlins family.