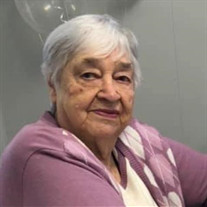 Virginia McClellan, 92, died peacefully at her home in Altamont during the early morning hours of Sunday, November 3, 2019. Raised on Buck Hill, her parents were Goldman and Sadie Johnson Carpenter. She is preceded in death by her husband of 45 years, Ray McClellan, daughters; Linda McClellan and Sheila Clark (Allen), and granddaughter Canaan Hughes. Left to cherish her memory are her daughters Wilma Biggerstaff (Tom) of Linville Falls, Thelma Laws (Bill) of Altamont and son Greg (Jan) of Altamont. She leaves behind eight grandchildren: Nathan (Christy) and Mitchell (Christina) Clark, Bill Biggerstaff, Katie Biggerstaff Crumpler (Ryan), Travis Hughes (Amanda), Dillon McClellan, Kim Montgomery (Larry) and Jason Gray, and eight great-grandchildren. Also surviving are her beloved sisters, Nina Miller and Anith Shorthouse of Morganton, NC and very special friends Jane Johnson, Betty Hardin, Pat Singleton, Patti Detwiler, and Jamie Beers. Virginia McClellan was loved and will be deeply missed, not just by her family, but by those who knew her or worked with her during her long and well-lived life. She worked her early years as a seamstress and in her later years became an artist of quilting and embroidery. She loved to travel and visited many of the United States. Her deep faith, her humor, and her gentle kindness will stay in our hearts forever. Services for Mrs. McClellan will be held on Wednesday, Nov. 6, 2019 at the Linville Falls Community Church with Rev. Dennis Aldridge officiating. Visitation will be held at 1:00 P.M. at the church with the service following at 2:00 P.M. Honorary pallbearers will be Tom Biggerstaff, Bill Laws, Allen Clark, and Jan McClellan, her sons-in-law and daughter-in-law whose help in so many ways over the years she deeply appreciated. Interment will be at a later date at Green Valley Baptist Church in Ingalls, N.C. Gifts in memory of Virginia McClellan may be made to the Disabled American Veterans (DAV) at VA Regional Office Federal Building, 251 North Main Street, Room 151, Winston Salem, NC 27101-3914 or the charity of your choice. Words of comfort may be e-mailed to the family by going to our website; www.webbfh.com., selecting Virginia McClellan’s name and then you may sign her guestbook. Webb Funeral Home of Spruce Pine is honored to be assisting the McClellan family. Mrs. McClellan’s obituary has also been posted on Facebook for viewing.

Virginia McClellan, 92, died peacefully at her home in Altamont during the early morning hours of Sunday, November 3, 2019. Raised on Buck Hill, her parents were Goldman and Sadie Johnson Carpenter. She is preceded in death by her husband of... View Obituary & Service Information

The family of Virginia C. McClellan created this Life Tributes page to make it easy to share your memories.

Virginia McClellan, 92, died peacefully at her home in Altamont...